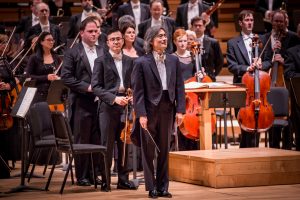 MONTREAL, June 29, 2017—The Orchestre symphonique de Montréal (OSM) and Kent Nagano are announcing today that, after a long deliberation, he has decided not to accept the invitation by the OSM to extend his contract as music director beyond 2020.

“We intend to continue the relationship with Maestro Nagano at the end of his term in three years so that the public and all of us can maintain a relationship with the conductor who, ultimately, will have spent 16 memorable years in Montreal,” commented Lucien Bouchard, chair of the OSM’s board of directors. Mr. Bouchard further wishes to highlight the outstanding accomplishments of the maestro, saying Kent Nagano will “leave an indelible mark on the institution,” and to praise Maestro Nagano’s leadership, creativity and discipline.

“The OSM, its administration, board of directors, as well as the community of Montreal and Quebec can be deeply proud of what we have achieved in our years of working so intensely together – over the past years we have accomplished nothing short of a miracle in shaping such a vital, financially stable, boldly innovative orchestra that continues to illuminate the relevance of the symphony orchestra for the 21st century,” declared Kent Nagano.

The maestro added that “following a decade and a half as music director, it seems like a natural transition point at which to change the nature of our relationship and we are presently enjoying creative discussions about the directions in which that could lead. The 21st century continues to be a prosperous, wonderfully creative and innovative time for the whole organization and the city of Montreal and there remain many exciting goals and projects to fulfill.”

“We’re now looking to the future, because we still have three magnificent seasons with Maestro Nagano, which will undoubtedly meet our audiences’ expectations. We’re confident that the OSM will continue to add new milestones to its glorious history,” added CEO Madeleine Careau.

Given that major international orchestras plan their seasons years in advance, the OSM’s management will quickly establish a process to select Mr. Nagano’s successor in order to ensure a smooth transition.

“These years with Maestro Nagano as the OSM’s music director have been incredible and will not be forgotten neither by the Orchestra nor its audiences,” concluded Mr. Bouchard.

About the Orchestre symphonique de Montréal

Since its founding in 1934, the Orchestre symphonique de Montréal (OSM) has made a name for itself as a leading orchestra in Quebec and Canada. The OSM is a cultural ambassador of the highest order, having earned an enviable international reputation for its many quality recordings and tours. The OSM proudly upholds this tradition under the leadership of its current music director, Kent Nagano, by featuring innovative programming that aims to rejuvenate the orchestra’s repertoire and strengthen its connection with the community. Over the years, the OSM has gone on tour approximately 40 times and roughly 30 excursions in Canada and abroad. The Orchestra has more than 100 recordings to its name on the Decca, EMI, Philips, CBC Records, Analekta, ECM and Sony labels, as well as on its own label. These recording have earned some 50 national and international awards.

The Orchestre symphonique de Montréal is presented by Hydro-Québec.