Kent Nagano leads five Philharmonic Concerts during the new season, in addition to the New Year’s Concert and a special concert at the International Hamburg Music Festival. These programmes include classic works by Mozart, Beethoven and Brahms. However, Hamburg’s General Music Director will also perform modern works, such as Ligeti’s Requiem and Atmosphères and Widmann’s Con brio.

Find here the season flyer with all concerts at a glance. 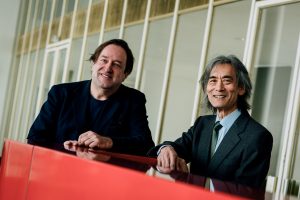