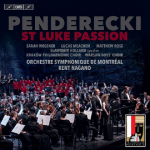 The Orchestre symphonique de Montréal and Kent Nagano released Krzysztof Penderecki’s St Luke Passion with BIS-Records on 6 June 2020 – this SACD was recorded on the opening night of the prestigious Felsenreitschule Salzburg Festival in July of 2018. The renowned polish composer and conductor Krzysztof Penderecki, who regretfully passed away in March 2020, was present in the audience the evening of the Salzburg concert.

Krzysztof Penderecki’s setting of the Passion story as told in the Gospel of St Luke was premièred in 1966 and immediately established a place for itself among the most important large-scale choral works of the twentieth century. Despite its decidedly modernist idiom, the music’s emotional power, glowing colours and sonic impact spoke to audiences as well as critics, one of whom described St Luke’s Passion as ‘the most important bridge between the spirit of the liturgy and modern music.’ Strongly influenced by the Passions of J. S. Bach, Penderecki pays homage to the great composer by using the B-A-C-H motif throughout the work, and like Bach, he has arranged his Passion in two parts, with monumental choral numbers framing the whole. The score is for large forces including an extended orchestra, three mixed choirs, plus a boys’ choir, speaker and three vocal soloists (soprano, baritone, and bass).

The OSM maintained a special relationship with the Polish composer and conductor for close to 50 years. Please find a video interview with Kent Nagano and Krzysztof Penderecki that took place in Salzburg in July of 2018 here.

Since the 1960’s generations have been acutely aware of the special compositional will and creative power of Krzysztof Penderecki.

The credo of expression in his artistry, which always seems as self-evident as it is convincing, set him apart as an avant-gardist – while he remained a romantic. A traditionalist and one who was able to resist and defend against the seductions of time, Penderecki has nevertheless experimented relentlessly. As he boldly composed in the atonal, aleatoric, and electronic languages, however, he was above all concerned with content of the statement and the resonance it potentially had upon those who listened to his music.

Penderecki was a humanist and brought his understanding of man and worldview to the fore in traditional work formats. He showed courage in terms of change as he made enemies out of the avant-garde camp as he confidently went his own way. One cannot imagine the Christian tradition of Europe and its timeless ties to the social developments of the world without him.

Clearly, he was a cosmopolitan yet was at the same time rooted in a deep relationship with nature.  Nothing could demonstrate this more clearly than the collection of trees he brought back with him from his visits to all corners of the world which he then planted in his private garden-forest surrounding his home.

Following a rehearsal the St Luke Passion, he once invited me to his home and as we sat before and within this magnificent universal forest, suddenly it seemed clear to me that Krzysztof Penderecki was the very incarnation of human creativity and, as such, his music is of timeless value to our generation and to the generations to come. – Kent Nagano