July 27th 2018. From January 2020 the conductor Omer Meir Wellber will be Music Director of the Fondazione Teatro Massimo in Palermo. The agreement was signed last night by Omer Meir Wellber, Francesco Giambrone (Sovrintendente of the Teatro Massimo) and Leoluca Orlando (President of the Fondazione and Mayor of Palermo). At the same time, the outgoing Music Director Gabriele Ferro was officially given the title of Honorary Conductor. 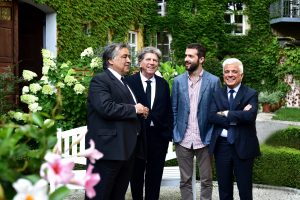 “I am very excited to have won the outstanding conductor Omer Meir Wellber for our theatre. The new Music Director has the responsible task and challenge to give the house an international dimension and to build as a team a high-quality theater, curious and innovative. Omer Meir Wellber will enrich us with his international experiences and his personality. I have already started planning some very important projects together with him.”

“I am very happy to become a part of the Teatro Massimo family. This has been a great friendship that began almost ten years ago, and I look forward to taking this theatre into the third decade of the 21st century. As music is an art that exists only in the present, it forces us to breathe and to think together. The combination of personalities, experiences and creative minds is the magic of theatre. I know that the bigger the role music plays in a city’s life, the bigger the cultural happiness will be – Palermo is a city of culture and of multi cultures from ancient times to today, and as such it is in my view the ideal stage for creativity, beauty and perfection.”