With Beethoven’s Piano Concerto No. 0 E-flat Major WoO 4, a nearly unknown youth work of the composer, and his Rondo for Piano and Orchestra WoO 6, Mari Kodama and Kent Nagano expand their joint recordings of Beethoven’s works for piano and orchestra with the Deutsches Symphonie-Orchester Berlin.

The 4-CD edition will be released on 11 October 2019 with Berlin Classics. 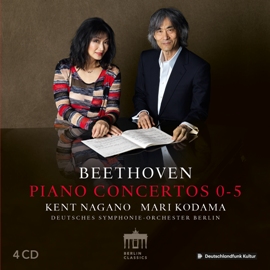 On this CD, Mari Kodama and Kent Nagano present a very personal adaptation of Beethoven’s Piano Concerto No. 0 which reflects their individual image of Beethoven as a youngster – exuberant freshness, an urgent sense of awakening in the young, almost childlike Beethoven writing shortly before his artistic powers developed to the maximum, the joie de vivre and vital energy in a style that owes something to the playfulness of both Haydn and Mozart. The adaptation is based on the autograph of the compressed score; a complete orchestration by Beethoven does not exist.

The 4-CD edition (Piano Concertos Nos. 0-5, Triple Concerto, Rondo for piano and orchestra, bonus track: “Eroica” Variations for piano solo) offers a profound insight into this year-long engagement of the musicians with the works for piano and orchestra of Beethoven, who has become a true musical companion for them. And not only that: ” “If you play them all, it’s like travelling with Beethoven through his entire life,” says Mari Kodama.