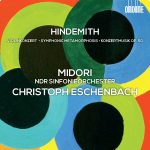 August 2013 sees the release of Midori’s recording of Hindemith’s violin concerto, which was made in summer 2012 with the NDR symphony orchestra and Christoph Eschenbach.

Later this year, her recital disc will be released on Onyx, with sonatas by Shostakovitch, Janacek and Bloch (Özgür Aydin, piano).

Midori will perform at the Moritzburg Festival’s anniversary concert on 11 August in Dresden, with Berg’s violin concerto and the Moritzburg Festival academy orchestra led by Eric Jacobsen. She will also return to the BBC Proms with a performance of Eötvös’ violin concerto DoReMi (dedicated to her) with Esa-Pekka Salonen and the Philharmonia Orchestra, and give 2 solo concerts at the Edinburgh International Festival.