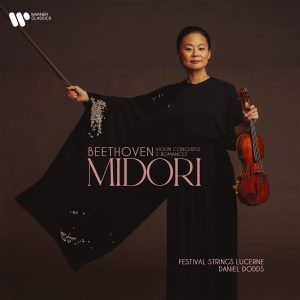 As one of the world’s preeminent soloists, the violinist Midori has been performing on premier stages around the globe for over 35 years. Warner Classics will release a recording of Beethoven’s Violin Concerto and his two Romances for Violin and Orchestra by Midori and the Festival Strings Lucerne on October 16th to celebrate the composer’s 250th birthday in December 2020.

The recording sessions had originally been planned around a concert performance with the orchestra in Lucerne and subsequent concerts in the UK, Singapore, China and Korea – but the COVID 19 pandemic led to the cancellation of all public events. The concert in Lucerne was also affected by this, although rehearsals had already started. Fortunately, the recording could still take place. Midori remarks:

“Through all of that, Beethoven guided my colleagues and me, his work focusing and inspiring us, our concentrations heightened, enveloped together in our musical efforts … Beethoven has provided a fortunate focus for me in such fraught times. I am reminded that he was a man of strong beliefs and a morality to which he fully committed, as an activist who took firm stands on many major issues of his day. At the same time he maintained the discipline that allowed him to create profoundly beautiful, often serene music, despite his many personal disappointments and struggles.

Beethoven’s determination still provides a model for humankind, leading us to recognize the best in our world as we reach toward the many achievements of which we are all potentially capable. Finding my place, as a musician, interpreting several of Beethoven’s masterpieces, grounds and inspires me today, as we all face so many challenges ahead.”