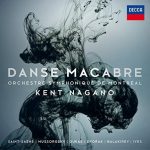 Kent Nagano and the OSM continue their collaboration with Decca by releasing Danse macabre.

Danse macabre follows on the heels of L’Aiglon, the lyrical drama by Honegger and Ibert that the OSM and Kent Nagano recorded as a world premiere.

All six works presented on the CD are linked by a common theme: Halloween. And although they were not all composed specifically on the occasion of that holiday, the works exploit elements characteristic of it, including death, witches, skeletons and demons.