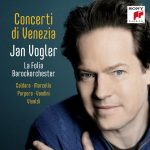 With this recording Jan Vogler tells the story of the cello’s journey from a continuo instrument to a melody instrument that started in Venice in the 18th century: “Within only a few years the dark-toned bass instrument was transformed into a virtuoso instrument capable of singing and joining in a lively debate with the rest of the orchestra. It was the city of Venice, with its breath-taking musical scene, that triggered this revolution, involving a dialogue between composers, musicians and instrument makers,” says Jan Vogler.

Jan Vogler has recorded the CD with works by Vivaldi, Caldara, Porpora, Vandini and Marcello together with La Folia Barockorchester. Giuliano Carmignola is his partner in Vivaldi’s Double Concerto for violin and cello.

Jan Vogler was keen “to find a new and at the same time ‘old’ sound for the cello using a Baroque bow and gut strings, a sound inspired less by our present-day ideas of the ethereal tone of a Baroque cello than by the colours and light of a Venetian painting.”

Jan Vogler and La Folia Barockorchester will present selected pieces of their CD during a joint tour in November: