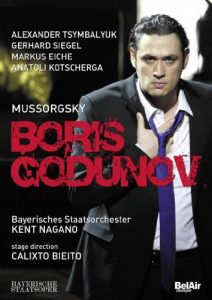 Mussorgsky’s opera „Boris Godunov“ was Kent Nagano’s final new production in his last season as Music Director at the Bayerische Staatsoper in Munich. The label Bel Air will now release a DVD of the performance beginning of February. “If there was a live recording, one would have to get it immediately“, wrote Helmut Mauró on 14 February 2013 at the Süddeutsche Zeitung on the occasion of the premiere.

Child murder, scheming monks and a tsar lapsing into madness – Modest Mussorgsky spreads the thematic arc wide in his choral opera, with which he attempted to awaken an awareness of his own time through the indirect route of a historic story.

Kent Nagano and stage director Calixto Bieito put the less often performed and much shorter first version of the opera on stage – this way the spotlight is turned on the inner life of Godunov who is beset with hallucinations and feelings of guilt.

For a trailer of the performance please visit Kent Nagano’s website.