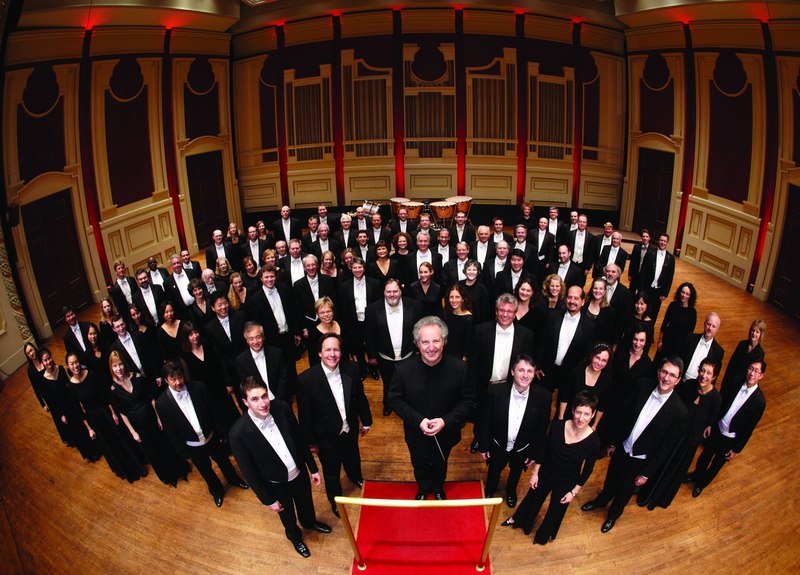 The Pittsburgh Symphony has a notable history of championing new American works. The Orchestra premiered Leonard Bernstein’s Symphony No. 1 in 1944, John Adams’ Short Ride in a Fast Machine in 1986, and Mason Bates’ Resurrexit in 2018 to celebrate Manfred Honeck’s 60th birthday. In the 2021/22 season, Manfred Honeck led five world premieres, with five commissions by the Pittsburgh Symphony including works by Michael Daugherty and David Ludwig.

Throughout the 2022/23 season, Manfred Honeck will lead 10 wide-ranging programs on the Orchestra’s classical subscription series, including three world premieres and seven Pittsburgh premieres. A highlight of the season will be Manfred Honeck’s dramatic conception of Requiem: Mozart’s Death in Words and Music, featuring an all-start vast of vocalists. Uniquely invented and created by Honeck, this version of the Requiem contemporizes Mozart’s final masterpiece though a 21st century lens, with text woven throughout.

The Pittsburgh Symphony has a long and distinguished history of touring both domestically and overseas since 1896. With approximately 40 international tours, including to Europe and to South America, a Far East Tour in 2002 marked first-time concerts for the orchestra in Kuala Lumpur and Australia. The Pittsburgh Symphony Orchestra was the first American orchestra to perform at the Vatican in January 2004 for the late Pope John Paul II, as part of the Pontiff’s Silver Jubilee celebration. In May 2009, the orchestra embarked on a four-concert tour of Asia, a trip which included debut performances in Shanghai, China and Kaohsiung, Taiwan, in addition to the first stop in Beijing, China since 1987.

Following the successful first European tour with Manfred Honeck and the Pittsburgh Symphony Orchestra in 2010, six more followed in 2011, 2012, 2013, 2016, 2017 and 2019. The most recent tour in 2019 took the musicians and its Music Director to ten European cities, the Alte Oper Frankfurt, the Elbphilharmonie Hamburg, the Philharmonie Berlin, the Concertgebouw Amsterdam, as well as the Cité de la Musique Paris, the Tonhalle Düsseldorf, the Palais des Beaux-Arts Brüssel, the Kuppelsaal Hannover, the Philharmonie im Gasteig in Munich and the Musikverein Vienna, with which the orchestra maintained a close relationship. The planned European tour in summer 2020 had to be cancelled due to the Covid-19-pandemic.

In August 2022, the Pittsburgh Symphony Orchestra led by Music Director Manfred Honeck will resume international touring for the first time in three years, as the orchestra celebrates the 75th anniversary of its first international tour with three weeks of concerts in Europe. The orchestra will visit Cologne, Dresden, Düsseldorf, Essen, Grafenegg, Hamburg, Ljubljana and Wiesbaden, and close the Salzburg Festival, the only American orchestra invited to perform at that festival. This tour marks Manfred Honeck’s 14th tour with the Pittsburgh Symphony.

The Pittsburgh Symphony Orchestra also enjoys an equally distinguished record of domestic tours, which over the years have showcased the orchestra in all of America’s major cities and music centers, including frequent performances at Carnegie Hall in New York (dating from 1900) and the Kennedy Center in Washington, D.C.

The Pittsburgh Symphony Orchestra has a long and illustrious history in the areas of recordings and radio concerts. As early as 1936, the Pittsburgh Symphony has been broadcast coast-to-coast, receiving increased national attention in 1982 through its series of network radio broadcasts by Public Radio International, produced by WQED-FM 89.3 in Pittsburgh.

Since 2013 Manfred Honeck’s successful work with the Pittsburgh Symphony Orchestra has been captured in thirteen recordings released by Reference Recordings on the PittsburghLive! series. The audiophile SACDs include tone poems and suites by Richard Strauss, Beethoven’s Symphonies No. 3, 5, 7 and 9, Brahms Symphony No. 4, Bruckner’s Symphonies No. 4 and 9, Tchaikovsky’s Symphonies No. 4 and 6, and works by Jonathan Leshnoff, James MacMillan, and Steven Stucky, and have received many excellent reviews for Manfred Honeck’s interpretations as well as the sound engineering by partner Soundmirror. After several GRAMMY Award nominations, the recording of Shostakovich’s Symphony No. 5 and Barber’s Adagio was awarded two Awards in January 2018: Best Orchestral Performance and Best Engineered Album Classical. The recordings of Bruckner’s Symphony No. 9 and Beethoven’s Symphony No. 3 and No. 9 also received multiple GRAMMY nominations. The two most recent recordings released are Brahms Symphony No. 4/MacMillan Larghetto for Orchestra (October 2021) and Beethoven Symphony No. 6/Stucky Silent Spring (June 2022).

In 2021/22, the Pittsburgh Symphony Orchestra celebrated the 50th anniversary of Heinz Hall as the home of the Orchestra. The acoustically outstanding performing arts center is in the heart of downtown Pittsburgh, and the cornerstone of the city’s Cultural District.

Not be altered without permission by PR² classic.

Click here for the webpages of the Pittsburgh Symphony Orchestra.

Manfred Honeck has firmly established himself as one of the world’s leading conductors, whose distinctive and revelatory interpretations receive great international acclaim. He is now entering his 15th season as Music Director of the Pittsburgh Symphony Orchestra, where his contract was extended last year to run through the 2027-2028 season. Celebrated at home and abroad, he and the orchestra continue to serve as cultural ambassadors for the city of Pittsburgh.  Guest appearances regularly include Carnegie Hall and Lincoln Center in New York, as well as the major venues of Europe and festivals such as the BBC Proms, Salzburg Festival, Musikfest Berlin, Lucerne Festival, Rheingau Music Festival, Beethovenfest Bonn, and Grafenegg Festival. In August  and September 2022, they will celebrate the 75th anniversary of the orchestra’s first international tour with three weeks of concerts at the leading European festivals.

Manfred Honeck’s successful work in Pittsburgh is extensively documented by recordings on the Reference Recordings label, featuring works by Beethoven, Brahms, Bruckner, Shostakovich, Strauss, Tchaikovsky, and others. They have received a multitude of outstanding reviews and awards, including many GRAMMY® nominations, and he and the orchestra won the GRAMMY® for “Best Orchestral Performance” in 2018. The most recent release, Beethoven’s Symphony No. 6, coupled with Stucky’s Silent Spring, was an “Editor’s Choice” of Gramophone.

Born in Austria, Manfred Honeck completed his musical training at the University of Music in Vienna. His many years of experience as a member of the viola section in the Vienna Philharmonic and Vienna State Opera Orchestra have had a lasting influence on his work as a conductor, and his art of interpretation is based on his determination to venture deep beneath the surface of the music. He began his conducting career as assistant to Claudio Abbado and as director of the Vienna Jeunesse Orchestra. Subsequently, he was engaged by the Zurich Opera House, where he was awarded the European Conducting Prize in 1993. He has since served as one of three principal conductors of the MDR Symphony Orchestra Leipzig, as Music Director of the Norwegian National Opera, Principal Guest Conductor of the Oslo Philharmonic Orchestra and Czech Philharmonic Orchestra, and Chief Conductor of the Swedish Radio Symphony Orchestra in Stockholm.

Manfred Honeck also has a strong profile as opera conductor. In his four seasons as General Music Director of the Staatsoper Stuttgart, he conducted premieres of operas by Berlioz, Mozart, Poulenc, Strauss, Verdi, and Wagner. He has also appeared as guest at leading houses such as the Semperoper Dresden, Komische Oper Berlin, Théâtre de la Monnaie in Brussels, Royal Opera of Copenhagen, and the Salzburg Festival. In 2020, Beethoven’s anniversary year, he conducted a new staging of Fidelio (1806 version) at the Theater an der Wien. In autumn 2022, he will make his debut at the Metropolitan opera in New York, leading a revival of Mozart’s Idomeneo. Beyond the podium, Manfred Honeck has designed a series of symphonic suites, including Janáček’s Jenůfa, Strauss’s Elektra and Dvořák’s Rusalka, all of which he recorded with the Pittsburgh Symphony Orchestra, and regularly performs around the globe. The most recent arrangement, of Strauss’s Salome, will be premiered by the Pittsburgh Symphony Orchestra in June 2023.

Manfred Honeck holds honorary doctorates from several universities in the United States and was awarded the honorary title of Professor by the Austrian Federal President. In 2018, the jury of the International Classical Music Awards declared him “Artist of the Year”.

Not be altered without permission by KünstlerSekretariat am Gasteig / PR² classic.