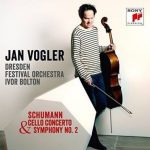 On 21 October 2016 the new Schumann recording of Jan Vogler together with the Dresden Festival Orchestra will be released by Sony.

Offering lively interpretations on historical instruments, the Dresden Festival Orchestra has become the unmistakable voice of the Dresden Music Festival since its inception in 2012. After the extraordinary success of its Dresden concerts, SONY Classical releases the orchestra’s first CD featuring works by Robert Schumann. Under the baton of Ivor Bolton and with cellist Jan Vogler as soloist, the musicians set out in search of the original sound of Dresden’s Romantic period.

In 2017 the Dresden Music Festival will celebrate its 40th anniversary. Find the festival‘s program here.