Polo G and Chief Keef announced a partnership with live concert platform DREAMSTAGE for an exclusive concert on Friday, October 23 at 7PM EST. The concert marks a major foray into hip-hop for DREAMSTAGE, the new cross-genre premium platform for ticketed live concerts. For this initial week of sales, as a special superfan pre-order price, tickets are selling for just $14.99. Ticket costs will increase a week from today.

Chicago rapper Chief Keef, a pioneer of Chicago’s drill style rap, was named an icon by Complex with a cult following, receiving massive success since the release of his 2012 debut Finally Rich. While fellow Chicago rapper Polo G was recently named a XXL Magazine 2020 Freshman of the year and Rolling Stone named his 2019 album Die A Legend the top spot on their “20 Best Hip Hop Albums of 2019.” 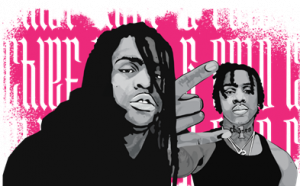 CHIEF KEEF: “I am excited to get back on stage and perform for my fans. Every show I do, I try to give them an experience and October 23rd is definitely going to be an experience. Dreamstage is a new digital venue that is all about premium quality, audio and video. Me and my bro Polo G will create a revolutionary performance.”

POLO G: “Coming from Chicago and getting to perform with Chief Keef is already amazing, but getting to do it on Dreamstage is going to take it to the next level. Our fans have never seen anything like what they are about to experience. It’s going to be crazy!”

“We are so excited to present the largest hip-hop virtual concert to date,” said Thomas Hesse, CEO of DREAMSTAGE. “Partnering with two of the most influential artists in hip-hop today and bringing them live into their fans’ homes. Polo G and Chief Keef have built a huge influence on popular culture and we are thrilled to be able to present them on DREAMSTAGE. Our premium platform will support an electrifying, close-up performance in HD quality. The artists are preparing an incredible show and we look forward to welcoming fans for a truly special and memorable experience.”

DREAMSTAGE is available on all mobile devices and PCs but its HD broadcast is best viewed through Apple TV where its vivid audio and video signal can be enjoyed through home theaters. While DREAMSTAGE was designed in response to the shattering effects on musicians of the COVID-19 pandemic, it is built to delight audiences for the long term. Its premium ticketed live performance audio/video platform is a dynamic solution for musicians of all genres allowing them to connect with their fans and monetize their performances.

DREAMSTAGE is the vision of three industry leaders, Thomas Hesse, CEO; Jan Vogler, Artistic Director; and Scott Chasin, Chief Technology Officer, who wanted to create a quality produced, high-definition experience unlike any other. The audience is taken to a diverse universe of virtual concert halls for different genres and occasions created by world class designers. A fully integrated experience awaits both audiences and artists with social media integration, chat, applause, emojis and many more interactive features to come.