On 14 October 2019 the conductor Omer Meir Wellber will publish his literary debut “Die vier Ohnmachten des Chaim Birkner”, which will be published in German by BerlinVerlag.  Learn more about the book here! 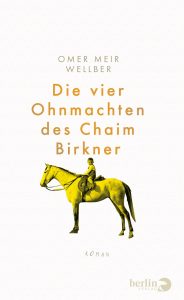 “Chaim Birkner is 108 years old, the oldest man in Israel. But he’s not celebrating, he decides to move back to Hungary, the country he fled, into his parents‘ apartment in Budapest he could never sell. That’s where his father and he “rescued” two Torah roles from the synagogue, that’s where he grew up with the
neighbour girl Leon, the yellow tree, the sordid dealings of his father …
Ever since he came to Israel in 1944 he has been lying his way through life, avoiding everything and everyone. Of all people it is, now, his neglected daughter Sharon who forces him to face life at least once… This is the novel of a tired and desperate man, confronting us with a history of Israel nobody ever dares to tell.”