The Pittsburgh Symphony Orchestra (PSO) has long been in the shadow of the Big Five. Wrong, says music journalist Alain Steffen in his new book “Let’s talk about …”. Alain Steffen tells the story of the orchestra since its beginning in the year 1894 until today and talks among others with former chief conductors Sir André Previn and Mariss Jansons. Manfred Honeck has been Music Director of the orchestra since 2008. Under his baton, the PSO gained international fame. Manfred Honeck leads the musicians to worldwide stages and major festivals.
Interviews with musicians, conductors, composers and soloists, like Hélène Grimaud, Thomas Hampson and Anne-Sophie Mutter will give insights into the way the orchestra works and will illustrate its unique sound language. A tour diary takes the reader to the concert hall and behind the scenes. 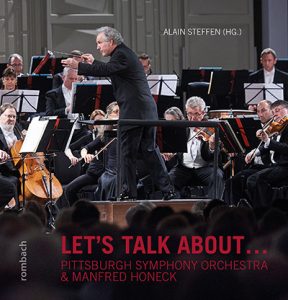 The book has been published in German language at Rombach publishing house. Find here further information.